Tentatively .. providing ‘it’ doesn’t fall through .. I have the chance to upgrade either my turntable, or digital front end, or amps.

If it’s going to be a new digital front end, I’m strongly thinking about going the Auralic Vega G1 Network Streamer route (which will retire my olde Meridian DAC) and with the help of Roon .. will stream lovely Hi Res files to my Sonos.

I’ll let you know if any of these are workable .. ‘if’ everything pans out.
Posted by Ken Worthing at 20:07 No comments:

Mishaps and Lost Treasures from The Attic (Part.1) ..

Back in the dim mists of time (early 90's), I had an AV system that was splendiferous! The main amp was Denon's AVR-3200. An absolute humongous best of an integrated amplifier .. 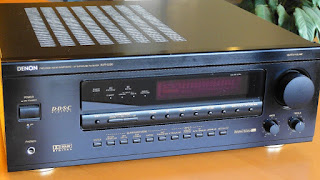 Time moved on and my AV system's components got either put to one side or sold as hard economic times bit-in. The AVR-3200 got put up in the various attics of houses we moved to. It collected dust and occasionally I thought to myself .. what if .. what if .. I put it to use someday again? Indeed, what if?

So, nigh-on 30 years after last turning it on, I took it down from the attic and gave it a good inspection. Surprisingly, the actual body had nary a mark on it, but peeping into it from the top .. it looked like I'd finally discovered the resting place of my hair from decades ago .. I could have knitted a new jumper out of it, if only I had the skills.

There was only one thing for it: take it my workplace and give it a damn good (but gently applied) blow-out from the compressed air blower that we used for cleaning out the inside of old, dusty, musky desktop pc's.

The big bang didn't happen as a resounding 'click' from the solenoids and relays kicking back in to action .. no burning smell (that was a good sign, surely?) .. no overheating .. hmmm! .. after all this time .. good I be still on to a winner???

Leaving it to settle in, I went back up into the attic and plugged in my same-period-as-the-amp Sony DVP-NS92V SACD/CD/DVD Multi Player and loaded-up Bowie's awesome 'Ziggy ..' SACD (using toslink for connection) .. 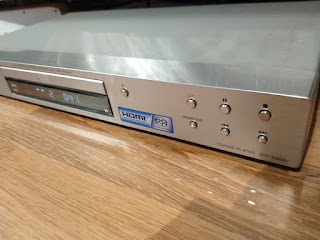 I almost passed-out when the flippin' thing played! .. however .. not flawlessly. There was some distortion at peak level on certain songs.

Not to be deterred, I switched out the Optical connection and replaced with a darn good IXOS stereo interconnect. Bliss! The analog section of the amp was 100% flawless. After nearly 30 years in various attics, through cold winter's and scorching summers, I'm surprised it even turned on.

As I'm now using Naim amplification, the trusty Denon will not be going back into the 'system, nor will it be heading back up into the attic .. Nay! .. of to eBay she will shortly go.

Part.2 of this particular stream of consciousness will be coming soon.

Posted by Ken Worthing at 11:17 No comments: